Corrindon Dancer is owned by Mrs Margaret Brooks and Mrs Doreen Hoare. He was bred in Ireland by Mr P Hoare in 2011.

Corrindon Dancer is a graded Irish Draught stallion. He stands at 16.2hh with over 9'' of bone. He achieved his Class 1 status with the IDHS(GB) on 1st April 2015. The inspectors particularly liked his strong topline, powerful paces and athleticism, with a positive attitude to jumping. The inspectors overall comment read ''Corrindon Dancer is a well proportioned Irish Draught horse that stands over plenty of ground. He has 3 good powerful and active paces. He showed good technique and scope when jumping''.
In March 2016 Dancer passed the Sports Horse Breeding (GB) grading. The inspectors were very impressed with his athleticism and jumping technique and awarded him a PREMIUM.
Corrindon Dancer gained his BRONZE MERIT for dressage in November 2015, in just 3 outings, as a four year old.
Dancer was bred by Patrick Hoare of the Moylough Stud, Co. Galway. Dancer is by the legendary CROSSTOWN DANCER who was a Class 1, Gold Merit stallion for show jumping, he is also the only stallion to have won in all 3 rings at the Royal Dublin Show. CROSSTOWN DANCER is a prolific sire across a variety of disciplines. His progeny dominating the Blue Chip Championship and HOYS Heavyweight Hunter classes alike.
His dam MOYLOUGH HOLLY was sired by the legendary MERRY MATE. Holly was a Class 1 Bronze Merit mare for showing. She also achieved success at Royal Dublin Show being Reserve Champion Broodmare in 2011, when Dancer was a foal at foot. Dancer was 2nd in the foal class. Sadly, we lost Holly foaling in 2013, aged just 8, preventing any further achievements.
CORRINDON DANCER has inherited his parents gentle nature. Due to his fantastic temperament and attitude to work, Dancer has managed to successfully balance a busy stud career whilst training and competing under saddle. On the various yards where Dancer has been resident, his kind and friendly disposition has quickly made him popular.
From Dancers first stud seaon in 2015 at Twemlows, he had 100% fertility and every mare had a live foal.
In 2016 and 2017 David Dixon (Stanley Grange Stud) confirmed that all of Dancer's mare were sent home in foal.
2018 will see Dancer returning to Stanley Grange Stud.
Now licenced for worldwide distribution 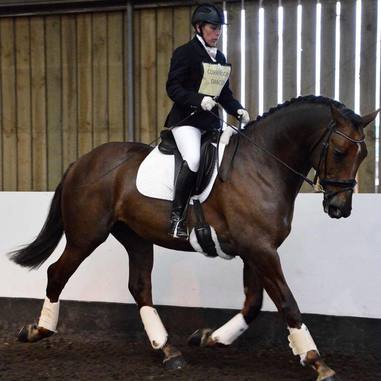